Since Hall 8/9 is differently and more centrally positioned on the EXPO site than Hall 13, a symmetrical building form was required. The structure of the light fish-belly shaped girders was supplemented by curved grid shells hung between them, functioning primarily as a hanging roof but also developing their shell
effect to handle horizontal and unevenly distributed loads. The character of the hall is shaped by the intensive consideration of three issues – energy, ventilation, and lighting – combined with the construction and the building form. The form of the roof with its hanging shells assists the thermal effect and the natural escape of hot air during the summer. At the highest point there are adjustable ventilation louvres that regulate the flow. A guiding panel above these louvres improves the air flow by means of the Venturi effect, while at the same time protecting the opening from rain. Being south-facing and having the air flow behind them, these building elements offer ideal conditions for photovoltaic modules. The northward roof surfaces are glazed at the steepest and highest part of the hall, which is thus lit entirely by diffused light. The relationship between the distance separating the skylights and the height of the space is about 1.5, which achieves an even daylight quotient of over 10 percent. 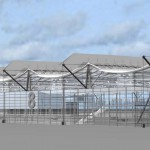 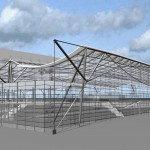 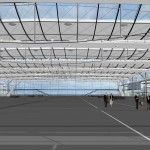 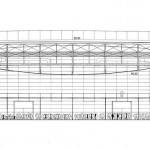 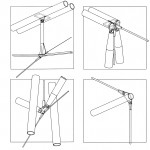