Pavilion of the Vatican, Hannover

The intention was that, after the world‘s fair,this EXPO pavilion would be disassembled, transported, and reerected as a church and community centre in Liepaja, Latvia. This led to the development of a modular timber system with a jointing technique that simplifies and facilitates the processes of erecting and disassembling the building. On the EXPO site, the main entrance to the pavilion is oriented towards the circulation axis of the national pavilions. The entrance is emphasised by the verticality of a bell tower that does not stand alone but was integrated in the rectangular plan of the pavilion. The pavilion, designed as a kit of parts, combines all functions in a flexible way under a single roof. The exhibition space encloses a calm courtyard with a form intended to recall the cloisters of old monasteries. On one side, it rises in steps to create a sacred space that formed the top attraction of the exhibition. This sacred space, later to become the church in Liepaja, reaches the same height as the bell tower and with it forms the main façade looking towards the EXPO grounds. The courtyard and cloister areas offers an area of calm and reflection in contrast to the bustling surroundings of the world fair. The intentionwas that on special occasions the courtyard would be opened up along the entire side facing towards the EXPO, that is, towards the axis leading to the national pavilions. On such occasions, the large screens made of wooden louvres could be swung upward to form a kind of roof canopy. The entire building is made up of 3.60-metrelong elements; larger spans are handled using inclined supports and trusses, giving the large exhibition hall a certain sense of scale and a sacred character. Glass elements alternating with closed panels, both measuring 120 x 360 centimetres,were intended to form a lively façade suited to the particular concept of the exhibition as well as the subsequent function in Liepaja. 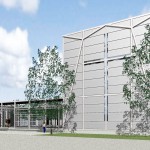 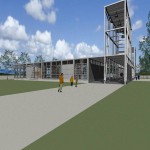 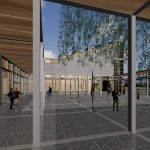 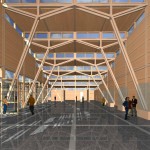