The requirement was for a canopy roof employed as a basic additive form with a striking appearance that, by means of repetition and its strong colouring and in conjunction with the modular service containers, would give the main axes of the EXPO grounds both continuity and identity. The form is determined by the performance required for the short period during which the canopy is used. All the connections in this light minimised structure are bolted. All parts are prefabricated in the works and, along with the foundations, could be taken down after the EXPO without causing any damage and used again elsewhere. The mem-
branes, made of environmentally friendly cotton, are intended to last for just one summer.The principle of the structure is convincingly simple: 4 double curved membrane surfaces on a square plan are spanned between steel sections that are stabilised against wind pressure and suction by means of tension and compression rods. Each canopy covers an area of 7.50 metres x 7.50 metres. The membrane surfaces are fixed linearly to edge beams and are post-tensioned by the process of fixing to the main beam. These beams also serve as gutters to lead rainwater runoff into a down pipe placed within the three-dimensional column.Each canopy can be coupled with further elements by means of bolted metal plates to create either linear or spreading forms. Makrolon coverings that extend beyond the edge beams
ensure that rain cannot enter through the connecting sections. 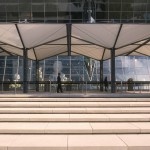 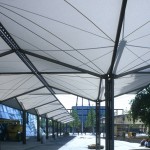 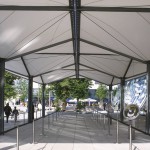 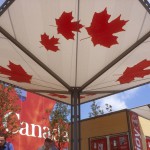 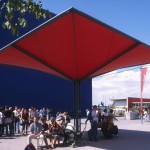 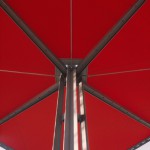 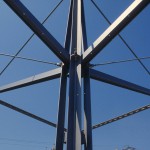 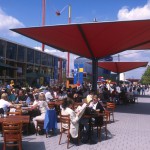