The important north–south axis on the EXPO grounds crosses the EXPO Plaza and needed a terminating feature at its northern end. At the same time, this location forms a virtual junction with the avenue running east-west in the western part of the EXPO grounds and therefore demanded a widely visible accent. The only planned function was a building for a café, and even here there were lengthy difficulties in finding someone to take on this venture. As a consequence, at the beginningof 2000, shortly before the opening of the EXPO, the implementation of the Plaza Café was still a matter of doubt. As a result of this situation, the design was shaped by the requirements of the time framework and the location: a building visible from afar that, if the decision to go ahead with it was made, could be erected in the shortest of periods and at a low cost. By placing the main areas on three terraced levels, a building height was achieved that, in urban planning terms, closes the space of the Plaza. The concept for the construction was developed by using the distance between the trees forming the two avenues as a construction grid. Originally, so that the building would terminate the axis and the square even more effectively, a hovering balloon the size of the crown of a tree was to be fixed above each column. This idea was later abandoned in favour of a tall stele that is illuminated at night. The café is entirely a steel structure and was erected in just 75 days. As the contracts with the people who run the business were only signed shortly after the start of building, the café had to be adapted during the construction
period to meet the new requirements of a restaurant with a full kitchen and three separate dining spaces. The restaurant, along with the terraces, can seat up to 400 people. The terraces are protected from rain by a glass roof. 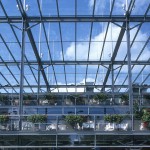 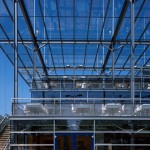 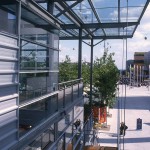