The renovation and modernization works transformed the existing stadium into a modern complex for professional sports, including football for the local club „Eintracht Braunschweig“, American football for the „Braunschweig Lions“, as well as athletic competitions on national and international level. Schulitz Architekten won the architectural competition in 2006 with an convincing urban concept including the modernization of the main stands and a rectangular office building for the local club “Eintracht Braunschweig”.
The new office building incorporates a fan shop, a restaurant and the offices for the local club “Eintracht Braunschweig”.
The vertical external sun shading elements not only give the office building a unique identity, but also prevent solar energy gains in the building. The sunshading concept in combination with further energy-saving concepts minimize the energy consumption of the building. 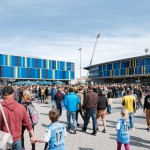 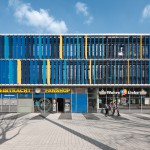 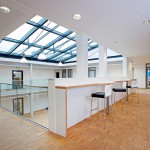 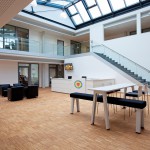