To find an innovative concept and appealing appearance for the new antenna reception mast in Leipzig that is over 50 metres high, an invited entry competition was set up, from which our design emerged as the winner. The tower, which has three platforms at heights of 39, 45, and 50 metres, serves to position and operate wave control and surveillance antennas. It supports the largest platform at a height of 39 metres, on a three-chord mast in a Vierendeel form. One of the three chords continues as the main chord to the tip of the mast and supports the two other platforms. This creates the structurally clear tapering silhouette of the tower. From bottom to top, the distance between the struts connecting the three chords
of the mast increases, in response to their loading, from 1.25 to 5.0 metres. Seen in perspective from below, this creates an optical illusion, making the tower seem lower than it actually is. The entire structure is designed in such a way that all parts are dimensioned for the standard galvanising baths and fortransport by road. The chords are welded together with their struts in the works and then bolted together on site to form the sections of the Vierendeel structure, which are then hoisted in into the final position by crane. As the final part of this procedure, a prefabricated 5-metre-high telescoping antenna is placed on the highest platform, which increases the overall height of the mast and the effect it makes. 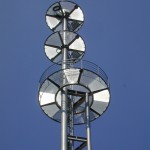