The client, a director of a research institute, desired a spacious interior, which was required by needs of his family and by the occasional receptions that he hosted for national and international scientists. The main living area, kitchen and master bedroom are located on the main floor, while the children’s rooms are in the large cellar, opposite the efficient service area.

The building was orientated, according to the site, in a north-south axis. A central hallway rises to form a clerestory that bisects two shed roofs. Both the overhead skylight and the generous glazing of the facades allow the inner spaces of the house to have an especially cheerful and light character. The structural work, a wood and steel skeleton, was carried out with minimal materials, adding to the light character of the house. 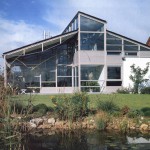 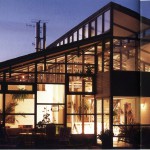